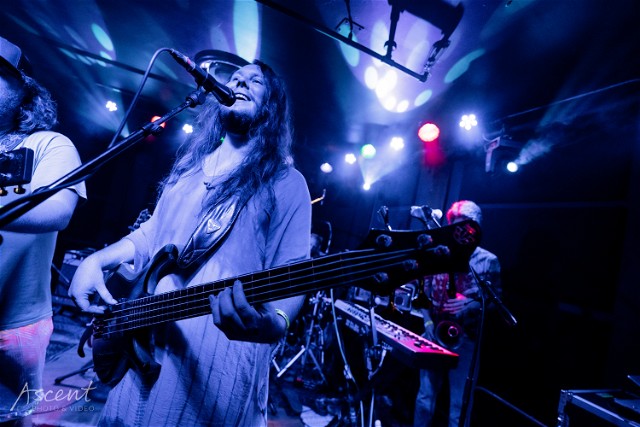 "Take a look at these hands." - David Byrne

These two sets of five fully analog digits are truly one-of-a-kind hardware. Only six sets of five were ever manufactured (two each in '93, '97, and '01), as the nine-month production timeline for a single set proved to be less than profitable for Roy & Cooper LTD. Both L5 and R5 have a slight idiopathic compression defect on the interior of the connecting joint which can intermittently create an artificially-low cap on the outgoing electrical signal, but this is fortunately quite manageable with extra maintenance and rarely affects the performance of the digits themselves.

As one might expect from an instrument with a name more suggestive of a mid-level luxury sedan than an electric bass, this Ibanez rides smoother than Matthew McConaughey in a Lincoln MKZ. It's my first (and currently only) five-string, and my primary instrument on stage. It is incredibly comfortable despite the relatively heavy weight of ~13lbs (I'd recommend a nice padded strap). It has an ash body, a beautiful guibortia/bubinga top and bottom (which is very fun to say), and a through-body composite neck of guibortia/bubinga, maple, and panga panga (which is also very fun to say) supported by two internal graphite rods. The pickups are passive Aguilar DCBs.

"I made a mistake." - Oscar Pistorius

Though I rarely break it out on stage these days, it was my primary electric bass from 2016 to 2019. And this is a fun one! Despite Jaco being famous for his fretless Fender Jazz, this particular bass has an original Fender fretted neck with a signed Jaco nameplate. Its serial number, lower than the legal drinking age in Québec, is not included in the Fender serial masterlist. I believe that five are confirmed to exist, including this one. The prevailing theory is that Fender erroneously began their first run of the Pastorius Signature model using fretted necks, but caught the mistake after only a handful were shipped. I acquired it from my sister Michelle ("MiMo") Tran who is also a bassist (and nationally-known barista), who in turn had received it as a gift.

While most electric upright basses sound very similar to fretless electric basses, the Eminence stands out as having a tone that is remarkably true to that of a full-sized upright bass, despite its body size. (It is a ¾ scale bass, which for uprights is technically and unintuitively full-scale. I did once play in an orchestra with a gentleman who was 6'7" and played a ⅞ size.) There is a real wooden sound post, which makes a world of difference in tone. The neck is removable and fits in a protective hard case for long-distance transportation (similar to a golf club flight case). I have it strung with a high C-string rather than a low B-string, which adds a cello-esque range and tone for bowed playing. I'll usually break this one out for special shows, especially for Kendall Street Grass Company, and for studio work. If I had a dollar for every time a recording engineer doubted how well the specially-designed Realist Pickup DI would compare to a mic'd full-body upright, I could buy myself a sandwich. A nice sandwich. If you ever want to buy me a sandwich because I do not get paid money to surprise recording engineers (or for any other reason), I usually like an Italian, hold the tomato but pile on the peppers.

I play DR Hi-Beam roundwound strings, but like to wear them in significantly before performing, and especially before recording. I find the worn-in tone of the Hi-Beams to be superior to the tone of fresh Lo-Beams. And to be fair, who other than Lil Jon doesn't prefer getting high to getting low? (Actually, I'm not quite sure about his order of preference.) Worn Lo-Beams don't maintain enough high-end tone; it's fairly easy to roll off some upper frequencies if they are too present, but it's difficult or impossible to add high end when there isn't much there to begin with.

"G.K., Gronky Kong" - Robert Gronkowski to himself in the mirror, probably

This solid-state amplifier from the specialty bass company GK packs a punch and sounds amazing, especially considering its affordable price point. I haven't found an amp I like better that doesn't run at over three times the price, and maintenance on the GK is generally easy or inexpensive. It has tone shaping controls for upright players, which I sometimes use with the Eminence EUB to really make that tiny little thing sound huge. And I know a thing or two about making tiny things seem huge.

My favorite thing about MarkBass speaker cabinets is that they sound exactly like whatever you put into them. The tone is incredibly clean and pure (unless you add grit elsewhere, which is not to be discouraged). This versatility is why many bassists who play both electric and upright swear by these cabinets, as others from manufacturers like Ampeg tend to drastically shape the tone of anything put into them. The ports on the HF model help the system "breathe" (here's some light reading on ports if you're curious). It's also insanely durable, and surprisingly lightweight at only about 65lbs. To add even more transportability I've attached four caster wheels on the bottom. The classic black and yellow bumblebee color scheme is also slick, though I'm actually a Raiders fan. Don't tell Mike. Or Will, because they might be the same person.

Radial Engineering Bassbone OD Bass Preamp: This is a must-have for bassists who play both electric and upright, as there are two separate, click-switchable inputs with their own EQ. One input has a ohm booster designed for upright bass piezo pickups to send a level signal for each instrument. The tone shaping is also solid. It essentially also fully functions as a Radial DI box, and they're known for their top-notch DIs.

Radial SB-15 Buffer: I really only have this because it converts two 12v power outputs into 15v for the Bassbone. Radial is weird with power. Probably because they're Canadan. And yeah, I guess it's also a buffer.

Earthquaker Devices Avalanche Run V2 Stereo Reverb/Delay: This is my favorite effects pedal of all time. Get it? Ha. But I mean it, too. Honestly I love this thing so much and it has so many amazing sounds you can easily get out of it that I can confidently say: if you're a bassist looking for a delay pedal, look no further. It's certainly on the more expensive side, but I promise it's worth every penny. It has great live and studio applications. Many Earthquaker Devices pedals actually sound amazing when applied properly to bass, despite them being primarily designed for guitar. For the record, they did not pay me to say you should buy one, but you should.

TC Electronic Polytune 3: This is a tuner. It is a good tuner. Some tuners have a hard time with bass. This one does not.

TC Electronic Sub-N-Up Octaver: The Sub-N-Up is my favorite octave pedal as it detects bass frequencies much more effectively than any other octaver I've tried. It goes both ways, because no shit, but also can combine octaves (it's polyphonic). You can even go down two octaves, a feature only recently made possible through scientific discoveries made by the government while researching the elusive brown note. I heard a rumor that they found it, but they won't tell us, so it's up to TC Electronic to show us.

Dunlop CryBaby Mini: Great wah sound, and I prefer wah pedals like this one that have springs which push it back into the "off" position when you lift your foot. The mini is also nice because it's smol and easier to play with bare feet.

MXR M87 Bass Compressor: This is a compressor. It is a good compressor.